Posted by Right Brain Thinker at 9:13 AM No comments: 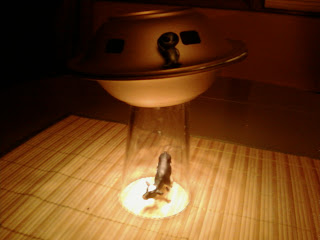 Want to make a fun, economical gift.  How about this geeky little lamp made from items from your local dollar store?  For better pictures and complete directions head over to DollarStoreCrafts.com.
Posted by Right Brain Thinker at 10:40 PM No comments: 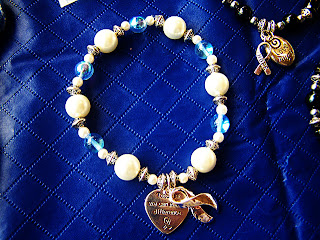 Although I have never had a desire to make jewelry, it has turned out to be my best money maker for fundraising. Saturday I spent the day outside Sam's Club peddling my wares, and I am happy to say combined with what I have sold to friends and family, I am half way to my initial goal of $1,000.
Posted by Right Brain Thinker at 10:11 PM No comments:

Born again - for the third time

I will never forget the first time I held my son in my arms and gazed upon his face. I knew then and there I had been trusted with something very special. Every single day of the past nearly twelve years, I have had the privileged to see his shining face, and I have been in awe of him. He fills my heart with such joy I cry looking at him sometimes. Yeah, I got it bad - I know! Sometimes, when he was a baby he would look up at the corner and smile, behaving like someone was there talking to him. As he got older and could talk, we would ask him who he was talking to, "Jesus," he would say. Now mind you, we didn't go to church, and although we considered ourselves Christians, he was not exposed to God enough to come up with this on his own. It was then no surprise when he was old enough, that he became born again for the second time.

Recently my precious baby boy experienced a third rebirth. A life altering change so severe, his day to day life will never be the same again. He has type 1 diabetes. Every single meal and snack he eats is preceded by strict carb counting, blood testing, a math formula, and a shot. Even with all this, factors such as heat, exercises, stress, and hormones can cause his blood sugar levels to rise or even worse, drop. There now is the constant fear that he could suffer a seizure (or God forbid something even worse)in his sleep, (or any time for that matter) and he will fight a life long battle against heart disease, kidney disease, eye disease, and circulatory disease.

I started writing this post almost a month ago, when David was still in the hospital. I am finally able to finish it without tears. We have started our new normal and habits are starting to form, although still difficult and somewhat awkward. We are blessed and thank the lord that it was caught in time, that through modern science and medicine we can manage this illness fairly well, that we have a wealth of information at our fingertips via the internet, and that David is a fantastic kid who is handling this like a trooper without complaint. I am even more in awe of him than ever. I think I will stop here and beat the tears this time. :-)
Posted by Right Brain Thinker at 7:19 PM No comments:

Labels: On My Mind, Type 1 Diabetes

This is quite disturbing to watch, but I beg you to pass it around, post it on your blog and/or Facebook, have everyone you can over the age of 15 watch it.

Posted by Right Brain Thinker at 1:37 PM No comments:

Labels: On My Mind

Walking for a Cause 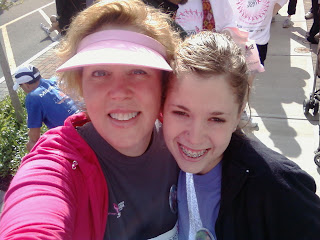 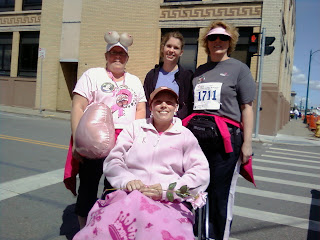 I did two 5k walks this weekend. The ARC of Schuyler on Saturday, and the Susan G. Komen Race for the Cure on Sunday. In past years I have also walked and raised money for our local SPCA and a walk in memory of two local police officers that were killed in the line of duty. Now that I think about it, I have been doing them for almost ten years now. I strongly encourage people to get out and participate in walks like this. It's a great way to get involved in your local community, meet new people, raise money for good causes and in doing so make a difference, and get some fresh air and exercise at the same time. If you don't want to or can't walk you can also look into volunteering at them.

Yes, those are boobies on my friend Shelly's hat. She wears them for breast cancer walks. That is her friend Judy in the wheelchair, and my daughter Sarah in the middle. Sarah ran the whole 5k this year. A piece of cake for her since she is a cross country runner, but I'm still very proud of her! Yay Sarah!
Posted by Right Brain Thinker at 9:19 PM No comments:

Labels: Healthy Ideas, On My Mind

I think the single most important thing an individual can do to be frugal and/or green is to be healthy. Healthy food doesn't come with over packaging that ends up in landfills, and contrary to what the media tries to tell folks, it is cheaper to eat healthy. Ever check out the price of a pound of dried beans? Brown rice? How about raw veggies like carrots, onions, and broccoli. I'm not just talking about vegetarian food either. Lean meats like turkey and chicken often go on sale for a dollar a pound or less, and one pound will feed more than one person. I can sure buy a lot of these healthy items for the cost of one fast food meal for my family, even if we only ordered off the dollar menu.

Another great benefit to being healthy is cost of health care and medications. My children and I have each gone years without having to go to the doctor due to illness. My children also rarely miss school. It is not uncommon for them to go the entire year without missing a day and one child went the entire time she went back to public school, eighth grade and all of high school, without missing a day. Now don't get me wrong, we do eat far too much crap, but I believe we are still overall pretty healthy due to some basic rules I have always stuck to - but those are for another post. Here is the biggy in regards to the environment when it comes to medications. Did you know that when you take meds they pass through your system and into the water supply. (The same, of course, goes for flushing them down the drain.) Water treatment plants cannot removed all those meds from the water. Here is one of many articles about this issue. I urge you to at least glace at it.

So here is where I tell you what a hypocrite I am. I quit smoking a few years ago. Actually, I quit smoking many times, sometimes many times in one year, over the past 20 something years. I hate to even say it - hate to admit I ever smoked! I never enjoyed it and quitting was the hardest thing I ever did. The result of finally quitting is that I let myself gain weight - a lot of weight! I have lost weight before and I knew that if I could beat nicotine addiction I could most certainly drop the weight. Well, it turned out to be harder than I thought it would be. "They" say (I have no idea who - just go with it) that your metabolism drops after you quit smoking and takes about a year to get back to normal. I really have no idea if that's true but it sure seemed that way. Fortunately for me I don't take medication for anything - yet, even though due to genetics, I am at risk for type II diabetes and high blood pressure.

So here we are, the entire point of this post - well, most of it anyway - it to say this out loud to the world. I have joined in on a weight loss competition with some of the folks I work with, and I'm going to try like crazy to win! I know I rambled all over the place with this post - let's just blame it on lack of fructose and leave it at that!
Posted by Right Brain Thinker at 1:03 PM 1 comment:

Labels: Green Ideas, It's All About Me, My Frugal Life Series
Older Posts Home
Subscribe to: Posts (Atom)

Right Brain Thinker
I like to make things, but since I get bored easily, I make a lot of different things. My newest passion is raising money for the Juvenile Diabetes Research Foundation (JDRF), since my son was diagnosed with Type 1 Diabetes May 19, 2010.

I like sharing info, so please feel free to leave comments, tips or any other relevant information.